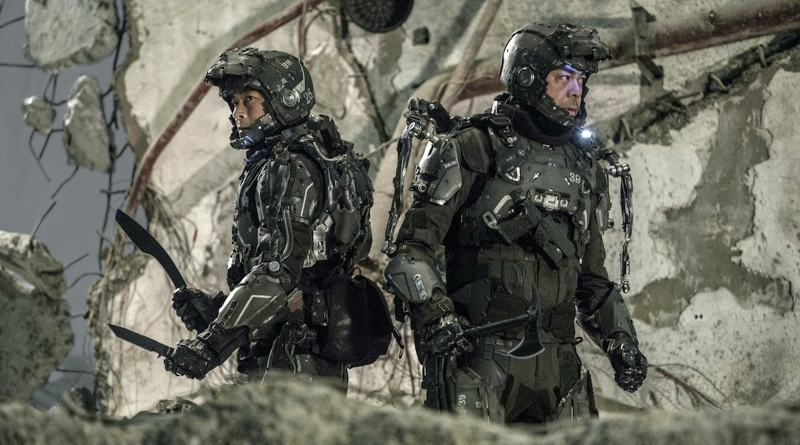 Making a local sci-fi film is a tough sell in Hong Kong, let alone one that cost a whopping HK$450 million (!) budget. The movie in question is Warriors of Future <明日戰記>, which was originally released in China and Hong Kong cinemas in August but viewers in the rest of the countries can finally get their chance to stream it on Netflix beginning Friday.

Let’s begin with the story, which is credited to Lau Ho-Leung (2015’s Two Thumbs Up <衝鋒車> and 2020’s Caught in Time <除暴>) and Mak Tin-Shu (2016’s Trivisa <樹大招風> and 2022’s Detective vs. Sleuths <神探大戰>). It’s strictly formulaic. The kind that you have seen countless times before in other sci-fi movies, notably the ones from Hollywood. The movie basically borrows the concepts and whatnots from the likes of Aliens (they even have their own Newt in the form of a Chinese girl played by Cheng Xiaoxia) to RoboCop, Starship Troopers, Iron Man and District 9, just to name a few. And if that’s not enough, they even referenced the word “Pandora” straight out of Avatar since the movie happens to involve environmentalism.

In Warriors of Future <明日戰記>, Pandora is an alien plant, where we learn its existence from the result of a meteorite that hits the (futuristic Hong Kong) district of B16. The aforementioned plant will subsequently grow bigger and more rapidly too when it exposes to water including rainfall.

And with the impending rainfall going to bring chaos to the B16, a team of soldiers from the Air Combat Unit (ACU) led by Tyler (Louis Koo) is deployed on a mission to locate Pandora and stop its growth using a virus of sorts. The lead scientist, Dr Chan (Tse Kwan-Ho) is the one who engineered the P7N9 virus inside a canister-like gene bullet device capable of killing Pandora while maintaining the plant’s ability to purify the contaminated air. However, the mission is sabotaged midway, killing most of the soldiers and only a few of them including Tyler and his subordinates, a junior radioman named Connor (Wan Guopeng) and fellow soldier Lincoln (He Ziming) manage to survive.

Meanwhile, the colonel-in-charge from the B16’s command centre (Carina Lau’s Tam Bing) finds out about the failed mission and she is planning to execute plan B — bombing the whole of Pandora, even if it means sacrificing approximately 160,000 citizens around the area. Tyler’s commander and best friend, Johnson (Lau Ching-Wan) disagrees with her plan and persuades her to give him a chance to save them. Tam Bing could only grant him a three-hour window on a rescue mission, where Johnson quickly sought the help of his other friend and ex-colleague nicknamed Skunk (Philip Keung).

The fact that enlisting screenwriters like Lau Ho-Leung and Mak Tin-Shu, I was expecting a lot more from these two than just having them stick to the generic sci-fi storytelling 101. Given such a huge budget and the time (it went way back as early as 2015) that was spent to make this movie, it wouldn’t hurt to give the script a significant polish. Or maybe it’s because Warriors of Future <明日戰記> is a co-production between Hong Kong and China, they have to play safe with the way they tell the story without causing — well — a red flag. The movie’s underlying environmental message may have been universally relevant but frankly, it has already been told better in Avatar back in 2009.

Still, that doesn’t mean the story is devoid of a localised angle relatable to Hong Kong people. This is especially true with the never-give-up-hope mentality seen in Tyler and Johnson’s sheer determination to succeed in their otherwise impossible mission at all costs. It also helps that Ng Yuen-Fai, a visual effects specialist famous for his work in 2006’s Re-Cycle <鬼域> and 2009’s The Storm Warriors <風雲2> making his directorial debut knows well how to overcome the otherwise typical story with a fast-paced rhythm (it only runs a lean 100 minutes) and most of all, a better-than-expected technical showcase in special effects and action set pieces.

For decades, I always felt that Hong Kong cinema is always lagging behind when comes to tackling the sci-fi genre. This is particularly evident when compared with their usual bread-and-butter of action, cop/triad and comedy genres. It’s not that they lack trying, with the likes of the little-seen Health Warning a.k.a. Flash Future Kung Fu <打擂台> (1983) as well as others like The Wicked City <妖獸都市> (1992), Hot War <幻影特攻> (1998) and CJ7 <長江七號> (2008) being some of them in the list. But their overall qualities are varied to the point of either being underappreciated or worst, embarrassingly bad (that 2002 abomination of Andy Lau-starred The Wesley’s Mysterious File <衛斯理之藍血人> being one of them).

Well, Warriors of Future <明日戰記> changed all that with Ng Yuen-Fai’s special effects background proved to be helpful enough in realising Louis Koo’s passion project to life. The extensive use of CGI may have been inconsistent at times but it’s good enough for a Hong Kong sci-fi movie. The creature effects (the ferocious mantis-like aliens) and the robot designs (the RoboCop‘s ED-209-like heavily-armed robots and the mecha suits worn by Tyler and Johnson) have a distinct video game-like feel and look.

Having Jack Wong (Wai-Leung) in overseeing the action choreography is a major plus too, where Ng Yuen-Fai’s mix of propulsive and slow-motion camerawork, albeit some of the fast cutting and jittery shots, made the action sequences such a cinematic experience. Scenes like the attack in the abandoned hospital and the elaborate Speed (1994)-like elevated highway chase are some of the key moments worth mentioning here. At one point, Ng Yuen-Fai even gets creative with his camerawork during the latter scene, shooting continuously in and out as well as the back and top parts of the speeding vehicle as the soldiers fight against the opposing androids.

As for the cast, the all-star combo of Louis Koo and Lau Ching-Wan resulted in a pair of engaging performances as Tyler and Johnson respectively. Koo and Lau’s charming buddy-like chemistry, coupled with their no-nonsense personalities are the main reasons that help elevate their characters. Philip Keung, sporting a dreadlock hairstyle, delivers an adequate supporting turn and so does Carina Lau, who plays the stern colonel. Too bad Tse Kwan-Ho and Nick Cheung, where the latter is worth praising for the makeup effects team doing a good job giving him a heavy prosthetic look on his face, are sadly undermined as the scientist and the wheelchair-bound general respectively.

The journey of making Warriors of Future <明日戰記> was no easy feat, where Louis Koo and his One Cool Film production company invested a sizable amount of money in the movie. It was a huge gamble that may backfire miserably if the movie fails to engage the viewers. Well, the movie initially did when it opened in China on the first week of August and it didn’t make as much money as intended. But it wasn’t until the eventual late-August opening in Hong Kong changed everything. Many Hong Kong people turned up in droves week after week to watch the movie in local cinemas. All to the point, where it broke the Hong Kong box-office records including overtaking Cold War II <寒戰II>‘s HK$66.2 million to emerge as the new highest-grossing Chinese-language film in Hong Kong with an impressive who-could-have-thought total of over HK$81 million.

Warriors of Future <明日戰記> is a testament that the oft-criticised “Hong Kong cinema is dead” is well, far from dead. This sci-fi movie marks a new era for today’s Hong Kong cinema and if there’s a sequel (judging by the mid-credits teaser) happens, let’s hope they have it ready with a stronger script the next time around.