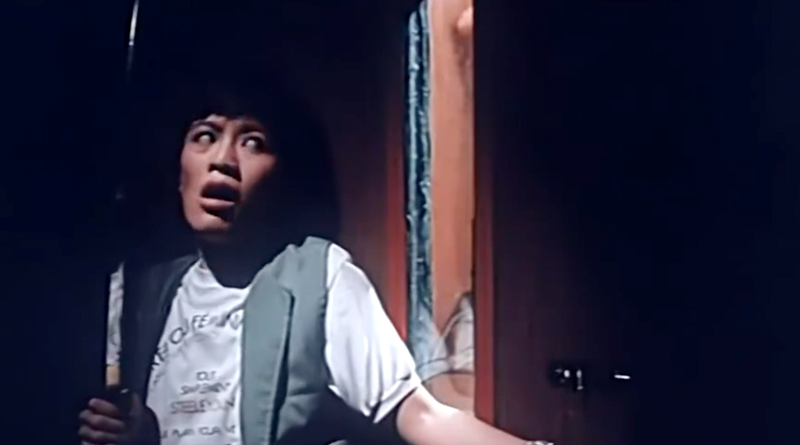 In our second part of the Hidden Gems column, we focus on Leung Po-Chi’s 1982 slasher comedy-thriller He Lives by Night <夜驚魂>. You can check out the first part — Derek Chiu’s Mr. Sardine <沙甸魚殺人事件> — of our last year’s review right here.

Two years before Leung Po-Chi directed Chow Yun-Fat, Alex Man and Cecilia Yip in the acclaimed WWII drama Hong Kong 1941 <等待黎明>, he made a horror movie called He Lives by Night <夜驚魂>. Written by then-newcomer Lo Kin, who would go on to contribute screenplays for movies like Esprit D’amour <陰陽錯> and Armour of God <龍兄虎弟>, the story follows a psychotic transvestite killer (Eddie Chen) who strangles women in white stockings.

A pair of cops (Kent Cheng’s Dragon and Simon Yam’s Lousy Wong) are in charge of investigating the murder case after the latest victim is found strangled to death in the back alley. And coincidentally, the murder took place just below the apartment where a nighttime radio DJ named Sissy (Sylvia Chang) lives.

It’s worth mentioning that the foreboding opening scene perfectly sets up the horror tone: A foreign dancer from the nightclub on her way back home passes through the back alley filled with large, hanging red and yellow sheets. Here, Leung Po-Chi made good use of its nighttime setting, sound and silhouette to evoke an escalating sense of ominous dread, leading to the murder of the aforementioned victim.

Of course, being a Hong Kong movie and one that comes from Cinema City production studio, He Lives by Night <夜驚魂> is far from a straight-up horror genre. The movie slips in a fair amount of obligatory comedy moments along the way, where instead of the cops actively pursuing the murder case, they would spend more time trying to woo Sissy. This is especially true for Dragon, who happens to be a huge fan of her radio show while Lousy Wong has a secret crush on her. This leads to a romantic rivalry between the two, which can be evidently seen during a (hilarious) scene in the Chinese restaurant, where they order a stack of bamboo baskets filled with dim sum varieties.

The comedy parts may have been a hit-and-miss but they are still generally acceptable, thanks to the lively trio of performances from Sylvia Chang, Kent Cheng and Simon Yam. Still, the biggest praise ultimately goes to Leung Po-Chi’s both technical (especially his virtuoso camerawork) and genre know-how in executing an effective horror thriller. He even borrows heavily from Brian De Palma for his lurid filmmaking style and most notably, Dressed to Kill (1980).

Apart from the opening scene, the subsequent murder set pieces — particularly the elaborate moments involving the two women (Elaine Kam and Mabel Kwong) in a house and the climactic finale set in a radio station — are both gripping and well-staged. Speaking of the finale, Leung Po-Chi has his darkly humorous way of ending the fate of the transvestite killer (you just have to see it for yourself). And equally worth praising here is Eddie Chen, whose creepy performance is one of his best roles apart from his then-groundbreaking undercover-cop portrayal in Man on the Brink <邊緣人> (1981).

He Lives by Night <夜驚魂> was nominated for 3 Hong Kong Film Awards in the technical categories and took home two of them: Best Cinematography and Best Film Editing. Finally, look out for Eric Tsang, who appeared in a cameo as one of the robbers in Kiss-style makeup (along with his partner played by Goo Ga-Lau) trying to rob a convenience store (Billy Lau also showed up in one of his earlier roles as a cashier).