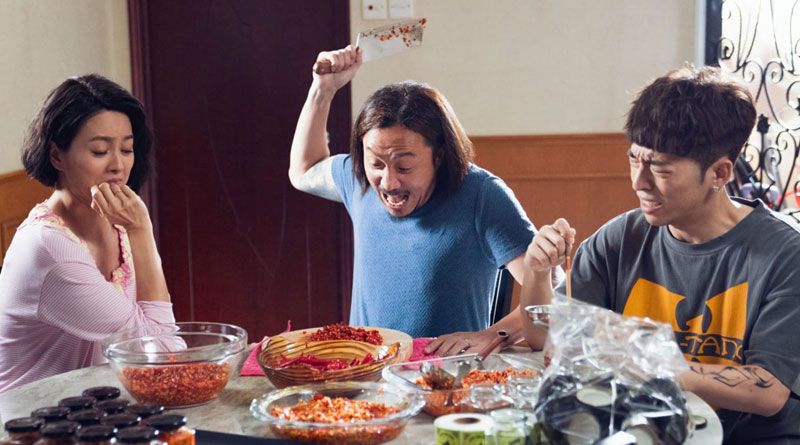 Originally scheduled for Chinese New Year release earlier this year, Chilli Laugh Story <闔家辣> was one of the few movies (among others including Table for Six <飯戲攻心>) that suffered from postponement due to COVID-19-related cinema lockdowns in Hong Kong at the time.

Fast-forward to five months later, we finally get to see Chilli Laugh Story <闔家辣>, which I initially expected to be nothing more than a typical Chinese New Year comedy. But that is where director Coba Cheng (Chun-Hin), who co-wrote the screenplay with Matt Chow (he also showed up in a cameo appearance as one of the customers shopping for gloves), surprises me otherwise.

But first, the story: Set during the pandemic, the Cheung family — Alan (Ronald Cheng), Rita (Gigi Leung) and their adult son, Coba (Edan Lui of the popular boy band, Mirror) — struggle to make ends meet as they force to work from home. Coba’s father is unemployed while his mother spends time making chilli sauce. As for Coba, he has been longing to become a successful entrepreneur and his opportunity arises when he plans to sell his mom’s homemade chilli sauce online.

After his parents agree to his plan, he starts surveying the right type of jar to store the chilli sauce and from there, their online business starts to grow as more demands keep on coming.

Although Chilli Laugh Story <闔家辣> is primarily marketed as a comedy, Coba Cheng — making his feature-length directorial debut — isn’t just interested to make a funny story about a family running an online business selling homemade chilli sauce. The comedy parts are mostly hits than misses, thanks to Coba Cheng and Matt Chow’s lively screenplay filled with Cantonese puns and sexual innuendos. At one point, the movie also somehow pays homage to one of the scenes from The God of Cookery <食神> (1996), even though I have to admit Lee Lik-Chi and Stephen Chow did it better and of course, funnier by comparison.

It also helps that the three principal stars including Ronald Cheng, Gigi Leung and Edan Lui all excel in their better-than-expected performances. The latter continues to prove his worth in the acting department after his two notable TV roles in ViuTV’s We Are the Littles  <男排女將> (2020) and Ossan’s Love <大叔的愛> (2021). While Gigi Leung can be recently seen in ViuTV’s The Parents League <反起跑線聯盟>, the last time we get to see her on the big screen was 2019’s Little Q <小Q>, where she acted alongside Simon Yam.

Then, there’s Sandra Ng, who delivers a solid supporting turn as Coba’s aunt Wendy, who is quietly suffering from loneliness since her adult son (Tony Wu) spends little time with her ever since he has his own family to take care of. Lo Hoi-Pang, in the meantime, made the best use of his otherwise limited screentime as an old-school hot dog seller.

Chilli Laugh Story <闔家辣> also benefits from timely issues related to pandemic-related struggles and property ownership, where the latter involves Rita has been trying hard to own a home since she feels it’s not worth paying rent. It gives the otherwise typical Chinese New Year comedy both added heart and soul and not to forget, something that we can all universally relate to these characters’ situations.

No doubt that Coba Cheng is one of the most promising newcomers to look out for in the future. While Chinese New Year 2022 is already five months behind, the overall relatable storyline and above-average performances are more than enough to justify its release even in July.

Don’t forget to stick around towards the finale and also during the end credits as Chilli Laugh Story <闔家辣> throws in some surprise cameos, with one of them being a certain major movie star.