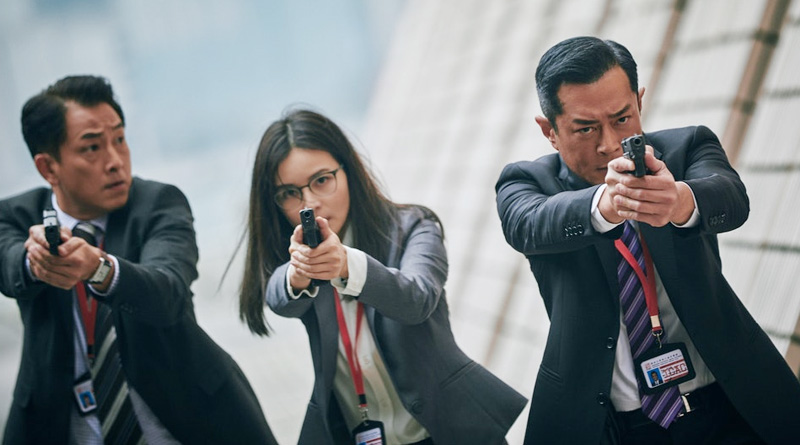 2021 has finally come to an end and the last thing I need is a wannabe Hong Kong action blockbuster that is laughably atrocious. That blockbuster in question is G Storm <G風暴>, which is the fifth and final instalment in the (alphabet) Storm franchise.

The last time we met Louis Koo’s by-the-book ICAC principal investigator, William Luk, he went undercover as a prisoner to investigate a wealthy inmate (Raymond Lam) and corrupted high-ranking prison officers in P Storm <P風暴>. Released in 2019, I was actually surprised with its overall entertaining mix of prison movie and undercover drama. Fast-forward to two years later, I was hoping that franchise director David Lam would improve further or at least retain the same reasonable quick-fix entertainment values similar to his last movie.

Well, despite G Storm <G風暴> being the end of the franchise, he chose to wreck his latest movie with an inane story that I couldn’t believe what I have seen over the course of a compact 90 minutes-plus runtime. While I understand the Storm franchise is always uneven when comes to direction as well as technical and story executions, G Storm <G風暴> seriously tested my patience with the way David Lam hastily put everything together.

This time, the story follows Luk investigating a so-called complex case involving the international human trafficking operation. The mastermind behind the operation includes the mysterious Siu Cheuk-Ngah (Michael Tse) and a notorious terrorist leader, King (Rosyam Nor). Then, somewhere in between, the Chief Justice of Southeast Asia, Judge Emma Pong (Jessica Hsuan) is being targeted by this group. And there’s more: Luk’s protégé, Ching (Kevin Cheng) finds himself in a difficult situation between upholding the law as an ICAC investigator and protecting his half-brother Fei-Hung (Bosco Wong), who turns out to be a corrupt customs officer.

G Storm <G風暴> reminds me of how David Lam made the first dreadful Z-graded Z Storm <Z風暴> back in 2014. It was baffling to see the same director over the course of five movies could end up getting worse in his filmmaking approach. What we have here is a shockingly amateurish direction, where he becomes clueless as ever in terms of connecting multiple story threads. Forget about anything that resembles “coherence” because it seems to me everything is rushed as if Lam wants to get it done as soon as possible.

Even if the movie wanted us to suspend our disbelief and just enjoy the ride, at least it made sense if Lam has the decency to give us well-executed action and suspense. But too bad he fails miserably in these departments either. Here, he prefers to shoot everything in an annoying shaky-cam approach and I noticed he can’t seem to frame his movie properly (e.g. random close-up shots and sudden zoom-outs).

Even enlisting veteran choreographer Nicky Li Chung-Chi for the first time in the Storm franchise doesn’t help either. The action regardless of shootouts, fistfights or the car chase are all shoddily edited to the point they are largely difficult to appreciate the choreography. Given the calibre of Nicky Li Chung-Chi in the action department that he has successfully done in notable movies like Invisible Target <男兒本色> (2007), The White Storm <掃毒> (2013) and Shock Wave 2 <拆彈專家2> (2020), it was a huge waste of his talent ruined by Lam’s incompetent direction. Lam’s overreliance on special effects and CG blood made the otherwise star-studded action blockbuster look like a cheaply-made movie in disguise.

Cast-wise, Louis Koo’s recurring lead role as William Luk is forgettable and while Lam did try to delve deeper into his character, where he suffers from PTSD (post-traumatic stress disorder). The thing is, the added psychological trauma that Luk forces to overcome himself is simply glossed over as superficial as possible. Not to mention the incident that led him to PTSD in the first place is barely justifiable, especially if you have seen how he manages to endure difficult cases over the past four movies.

The supporting actors consist of familiar faces ranging from Julian Cheung and Kevin Cheng to Bosco Wong, Jessica Hsuan and the late Liu Kai-Chi are all underutilised in this movie.

By the time G Storm <G風暴> ended with brief recaps in black-and-white showcasing all four Storm movies, I’m glad this franchise is finally over.