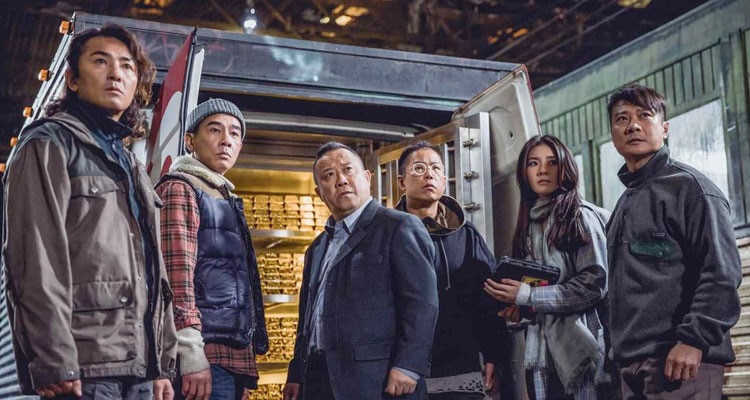 It’s the 90s all over again, with the Young And Dangerous <古惑仔之人在江湖> team making a comeback that reunites Ekin Cheng, Jordan Chan, Michael Tse, Jerry Lamb and Chin Ka-Lok.

But in Golden Job <黄金兄弟>, this globe-trotting action thriller trades machetes with heavy pyrotechnics consisting of gunfights, explosions and car chases. Co-star and action director Chin Ka-Lok, who also tripled as the movie’s director (this would be his third after 97 Ace Go Places <最佳拍檔之醉街拍檔> and No Problem 2 <無問題2>), blends his movie with enough nostalgia that brings back good old memories for those who grew up watching Young And Dangerous <古惑仔之人在江湖> series.

Which is why it feels like a comfort zone watching Ekin Cheng and the rest of his co-stars together. Each cast members are perfectly typecast that fits well their respective onscreen personalities. For instance, Ekin Cheng is cool and charismatic as Lion while Jordan Chan delivers a familiar emotionally intense role as the short-fused Crater.

Their strong chemistry is further justified with the help of Kwok Kin-Lok, Erica Li and Heiward Mak’s screenplay, in which they utilise the recurring themes of brotherhood and friendship in a poignant manner. It immediately reminds me of how Benny Chan successfully revisiting those two aforementioned themes in The White Storm <掃毒> five years ago, another nostalgia-heavy action thriller that did right with effective storytelling. If that’s not enough, Golden Job <黄金兄弟> gave us a new theme song and even revisits Young And Dangerous‘ <古惑仔之人在江湖> iconic song that solidified its nostalgia factor that bound to please both fans and newcomers alike.

The movie also features Yasuaki Kurata as well as the long-missed Billy Chow, whose last appearance was the little-seen 2005 China-made production called Great Heart <誓不罷休>. Although he doesn’t get to fight much in Golden Job <黄金兄弟>, it’s still nice to see him back in a major Hong Kong production. Too bad the female stars played by Charmaine Sheh and Zhang Yamei are reduced to thankless roles.

The action is a mixed bag, with some of them either looking ridiculously over-the-top and visually inconsistent (the Fukuoka-set nighttime car chase quickly comes to mind) or hampered by obvious CG blood. And yet, Chin Ka-Lok’s action choreography is frequently thrilling and tense enough to offset these technical flaws.